Increase Your Fruits and Veggies For Positive Mental Health! 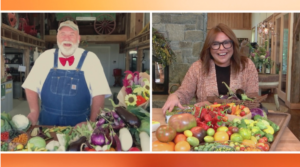 October 10th is World Mental Health Day. As mental health challenges become more prevalent, it’s important for us to recognize and place importance on our mental health.  A lot of work has been done in the past decade to de-stigmatize mental health issues, but we still have a long way to go.

A 2020 study shows that increased intake of fruits and veggies can actually increase feelings of optimism and reduce psychological distress.Farmer Lee Jones is an Ohio family farmer at The Chef’s Garden who supplies sustainably grown veggies that are 200-500x more nutritious because of the way the veggies are grown.

Some of the greatest chefs across the US rely heavily on Farmer Lee Jones veggies.  His farm also ships directly to you at home. His subscription-based veggie boxes also make great gifts or donate a box to someone in need today!The Chef’s Garden not only supplies unique, quality veggies, but they also share storage tips and recipes so families can get the most out of their subscription boxes.It couldn’t be easier, and we couldn’t be more thrilled to be working with The Chef’s Garden.For more information, visit https://www.chefs-garden.com/If you’ve been feeling down and you need help please reach out to a professional.  Follow Farmer Lee Jones for more nutritious insight on all things vegetables!Sending you and yours much love through veggies!In good health,The team at Dunn Pellier Media

Not a Chef? Not a Problem 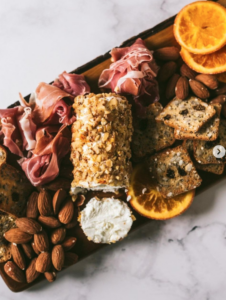 Well, friends, we have an interesting challenge coming up as we look toward Thanksgiving this year: Thanksgiving without those we are most grateful for, namely, our families. These are strange times, to say the least, and 2020 continues to ask us to dig deep into our hearts and souls to find the lessons, and to take them with us into 2021.

We may not be able to be with our families this year, but since Thanksgiving is about gratitude, let us try to be grateful for our health.

And just because we can’t be with our families doesn’t mean we can’t still enjoy the delicious eats that this holiday always has to offer! If you find yourself challenged in the kitchen and wondering how to make a gourmet Thanksgiving meal, we have got a solution for you!

SideChef is a cooking app for the modern chef, the chef who can follow a recipe but who doesn’t necessarily know what the heck it means to “blanch” the asparagus or “mince” the garlic (and the chef who knows those terms too). The app was created by a guy named Kevin. Standing in front of his girlfriend, wanting to make dinner for her…but not knowing how to! That was 4 years ago, and SideChef was born.

Today, SideChef features over 16,000 recipes with robust search filtering, meal planning, ingredient delivery, step-by-step guidance with photos, instructional videos, voice command, in-app timers, and smart appliance control. SideChef has simplified the process of making delicious meals and has proven that anyone can cook (we’re happy to report that the founder’s girlfriend eats quite well these days!).

Whether you join them virtually or just head over to their site for some recipes (like this Thanksgiving roasted chicken, or this apple turkey melt for day-after-Thanksgiving leftovers), SideChef has got your covered this year.

Check them out at sidechef.com and get cooking today! 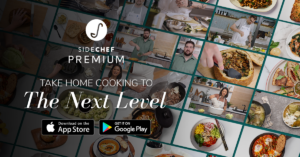 A funny thing is happening during COVID: home chefs are coming out of the woodwork! People who swore they didn’t have a culinary bone in their body and barely knew how to boil water have brushed their excuses aside and become masters in the kitchen! Ok, maybe not masters. But close to it!

If you’re one of those people who have discovered a love for cooking (and finally, a use for your pots and pan!) but could still use some help – great! Meet SideChef, a cooking app described by USA TODAY as being the “best app” and by the New York Times“favorite cooking app.”

Over 2.5 million meals cooked using SideChef’s dynamic step-by-step recipes. Home cooks of all levels now have the power to flawlessly create a delicious meal every time. SideChef unlocks your ability to cook at home, empowering you to eat healthier, save money, and impress your friends and family. Not sure if there is something for your palate and level of skill? They’ve got recipes for every allergy, every preference, every diet. Their library of 18,000+ recipes should be more than enough to meet your needs.

If you’re still intimidated, fear not. Their step-by-step recipe format provides an image or video for every cooking step so you know exactly what to do. They even have built-in timers so you never overcook or burn anything! How-to videos teach you valuable culinary skills from how to properly dice an onion, to how to press tofu. You can even rate recipes and share your photos to join in on the SideChef home cooking community, and exchange tips and share cooking fails and successes. How cool is that?

As if it could get any cooler, their meal planning tool allows you to select your recipes for the week, or save appealing recipes to your cookbook. You can then add recipes to your shopping list for a simplified grocery store experience, OR purchase your ingredients directly in the app, and they’ll be delivered through AmazonFresh. WHAT???

These guys really have thought of everything. So what are you waiting for? Try SideChef today and get cooking!

Meal Delivery with Territory Foods Plus: A Recipe for Summer Salad & Salmon Cakes!

The Accidental Paleo: Easy Vegetarian Recipes for a Paleo Lifestyle!

Vegetarian. Vegan. Paleo. Can you be all three?

So, you want to change your diet for insert-reason-here. You’re vegetarian friend got great results from cutting out meat, and your vegan friend’s skin has never looked better. But your paleo friend is now lean and looking like a super athlete, and you’re left thinking: I want all of that! How is one to choose? What if you like the concept of eating like our ancestors but don’t really have a taste for meat most of the time? What if you don’t want to go completely vegetarian, but you like the idea of eating fewer animal products?

THE ACCIDENTAL PALEO (FEBRUARY 2, 2017, Primal Blueprint Publishing) is spearheading a new movement in the world of food. The foodie landscape in one where dietary groups have a cult-like following and affinity for their particular eating principles. But like life, diet isn’t always that cut and dry. We go through phases where sometimes, we crave meat and lots of it. Sometimes, we can’t stomach it. Sometimes, we just want to eat plants and lots of them.

How is one to choose? What if you like the concept of eating like our ancestors but don’t really have a taste for meat most of the time? What if you don’t want to go completely vegetarian, but you like the idea of eating fewer animal products?  Read how Lauren “accidentally,” wrote a cookbook to satisfy all those inbetweeners…

Making her debut on the cookbook scene, Lauren Lobley, former pastry chef and head baker to Food Network star, Duff Goldman, gave up her pastries for healthy food almost ten years ago. For the first 25 years of her life, she was a carnivore. But things changed, and at times she has been a vegan, vegetarian, lacto-ovo, pescatarian, paleo, and/or some combination of all of them. After years of testing, she has found her sweet spot:  Vegetarian Paleo.

“You have a responsibility to try and be as healthy as possible. I decided to pick the diet (a plant-based diet) that I thought would maximize my chances of long-term survival. You have to make a conscious decision to change for your own well-being, and that of your family and your country.” – President Bill Clinton

In THE ACCIDENTAL PALEO, Lauren has compiled her favorite vegetarian paleo recipes into one user-friendly, something-for-everyone cookbook. Lauren takes a carnivore’s approach to plant-based eating. By being mindful of textures, layers of flavor, colors, and nutrition in every concoction, the recipes in this book are designed to satisfy every palate, whether they prefer their meals with or without meat.

The desserts are refined sugar free (and in most cases, naturally sweetened, like the almond butter banana cheesecake), the appetizers trick the palate with their clever use of nuts and plant-based milk to feign a creamy texture (like the warm spinach and artichoke dip – to die for), and the main meals carefully build upon an array of vegetables and sauces to leave everyone full and satiated (like the butternut squash lasagna).

THE ACCIDENTAL PALEO is culinary fun for the whole family, and a sure fire way to ensure the health and longevity of you and your loved ones. A feast for the eyes and the taste buds, get ready to fall in love with plant-based eating like you never imagined you would. And rejoice in the fabulous fact that when it comes to being vegetarian or paleo, you don’t to choose. You can have it both ways.

To request a PDF or a hard copy to feature or to have Lauren on your show, please call our office!

Lauren Lobley is a Canadian born and raised former pastry chef turned healthy chef. Together with her husband, Ted, and 22-month-old daughter, Madison Grace, they run and operate a yoga studio in Malibu, California, where Lauren provides the freshly baked vegan gluten-free granola, and Ted teaches the best class on this side of Malibu.

After culinary school, she joined the ranks and worked her way up as head baker to celebrity chef and Food Network star, Duff Goldman, churning out thousands of cakes a week at his West Hollywood location. Realizing how terrible she felt by consuming so much gluten, dairy, and sugar, Lauren began recipe testing with one goal in mind: to make healthy food taste good. She blogged about her experience on her website, Delectable You, and began featuring her recipes both on that site and on her increasingly popular YouTube channel.